This is pretty much what Christmas and the days surrounding it have looked like over here: 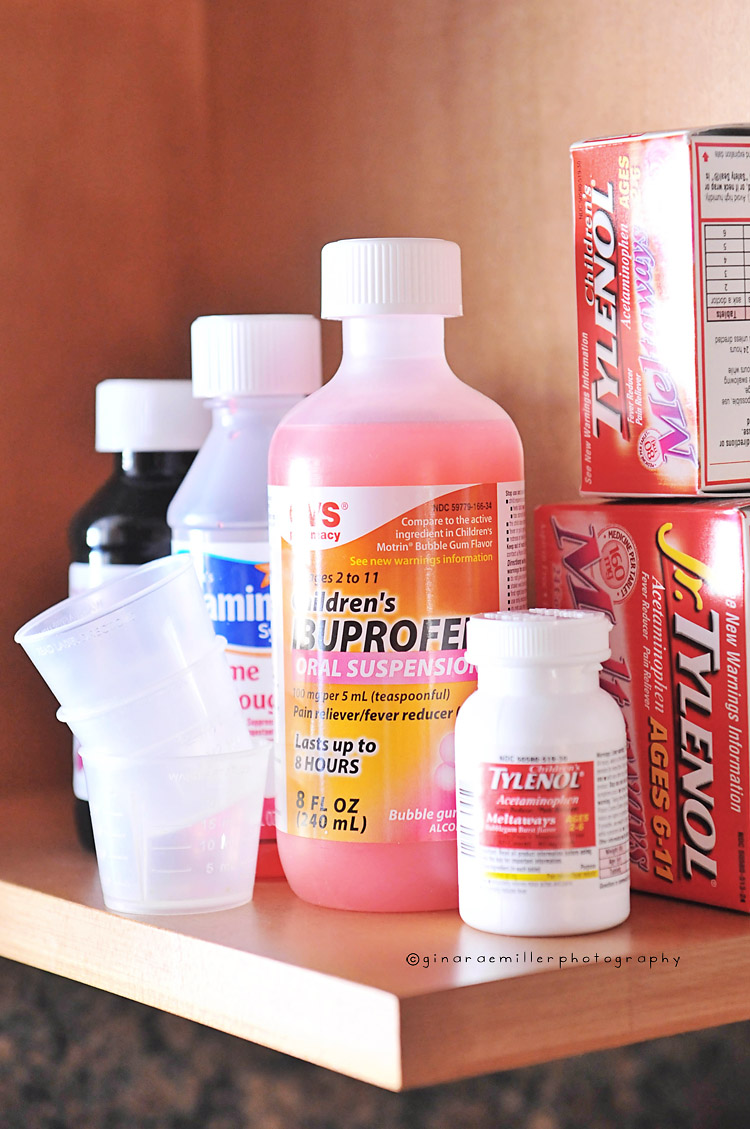 I am actually pretty certain that in the past 30 Christmases I’ve celebrated, this was the only one I’ve been sick for. And yes I realize I just posted a photo of childrens medicines but A- Emily was still kinda-sorta sick with me and B- I take childrens medicine on occassion. Have you tasted the Jr. Tylenol bubblegum meltaways? Unreal.

As far as sickness goes, like I always say, it could have been worse. We’ve all had mild colds and coughs over here so about 4 days before Christmas Eve (a holiday I host mind you), I decided to pop a NyQuil in an effort to catch some solid sleep. Well, sleep I got. What I could have done without were the ginormous hives covering my body the next two days. Eyelids, thighs, up and down my entire spine… It wasn’t pretty. Now, I am not 100% certain it was the NyQuil but it would make sense. And my mother looked it up for me and hives were notes as one of their severe reactions. Awesome. So I took some Benadryl and Zyrtec to battle that and they pretty much left me laying lifeless in bed for a complete day. I figured as long as I woke up hive-free Christmas Eve morning, I could still cook and clean and have my guests over. And so I did.

Christmas Eve actually was great. My 91 year old Grandma got to come over (she had gall bladder surgery about 2 months ago and hasn’t been here since). One of my favorite memories from the night was showing her that I set-up her nativity after she gave it to me. She couldn’t believe I had it out. And I can always, without fail, guarantee a seal of approval on my efforts in the field of motherhood from my Grandma at least once during the evening. <3 Every year. It’s usually about the time I start making reindeer food with the kids that I overhear her tell someone what a “wonderful mother” I am. I act like I don’t hear her but I do. So thanks Gram. :)

The kids went to bed a little later than usual this year. We always track Santa and this year Emily and Andrew are old enough to realize they don’t have to race to bed if he’s still flying over Canada. =P I read them “Twas The Night Before Christmas” and tucked them in around 10pm. I had an hour to prepare my breakfast items and get them in the fridge before my brother got off work and stopped by to help me set out the presents.

Tree was done, Buddy had left for the North Pole and I was in bed at 2am… feeling nauseous. I couldn’t believe it! I thought for sure it was in my head but I was nauseous throughout most of Christmas Day. :( The kids stayed in their pajamas (which means I have some adorable black and white plaid skirts for the girls that need a new event to be worn to!) and I slept the day away, minus opening gifts and taking a few pictures in the morning after Vin got in from work. The kids were so excited with everything! I think Andrew exclaimed at one point “This is more presents than last year!” My only regret? No family pictures. Actually not one picture with me in it. Next year I’ll have to make up for that.

One of the biggest boxes was Andrew’s and it had an iPod inside. I ended up wrapping it in 4 nested boxes and he was laughing, saying “This is a wild goose chase!” Grace has yet to stop playing with her new kitchen. The following day, while I still laid in bed zapped of all energy, she brought me some scrumptious wooden cookies. :) And my poor Emily had still been a bit under the weather herself. I’m wondering, with all of these coughs, aches and low fevers, if we haven’t all been battling some strain of the flu? Anyway, the good news is, the kids had a great day, EVERYONE seems to be on the mend now (finally!), our tree is down (yes it’s down and I am HAPPY about that. No opinions asked for *wink*), the living room is actually clutter-free again (for the most part) and Long Island got slammed with almost two feet of snow the day after Christmas, which was perfect timing! Tons of new toys and plenty of time to stay inside and play with them. :) We’ve opened iPods, Barbies, play food, Expo markers for the new giant dry erase board (a gift for our aspiring teacher, Emily), Guess Who?, a bubblegum factory (Andrew made us Watermelon Wham! gum yesterday with some help from me: yummy!) and watched tons of movies. Today the kids went outside to play. Hopefully we’ll do it again tomorrow and I’ll post a bunch of snow pics. In the meantime, a little assortment of Christmas photos since I can’t have my Christmas post containing one photo of medicine! 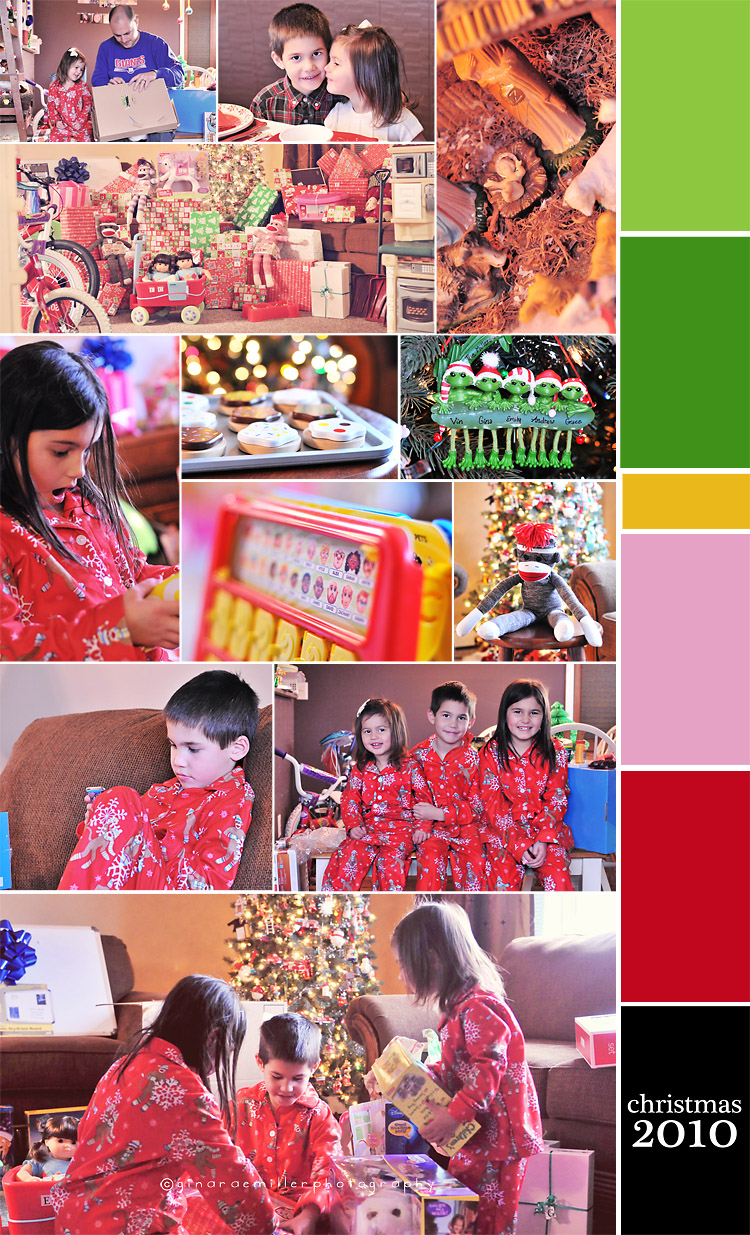 This was the year of Sock Monkeys! Each kid got an adorable monkey from Santa and of course, they finally got to wear their matching sock monkey pajamas. :)

Also, how adorable is my frog family ornament?! Had to get a picture of it before the tree came down. My brother Andrew bought it for me. It cracks me up whenever I look at it. Something about all of those skinny, dangling legs.

Santa was good to me. I got gift cards to VS and Starbucks, two pairs of VS sweats and a silver tote filled with delicious-smelling body lotions, sprays and gels plus my fave hair stuff. Vin got a new iPhone plus a Blu-Ray player. Since we already have a Netflix account, Santa figured he could stream movies right to it. Clever Santa.