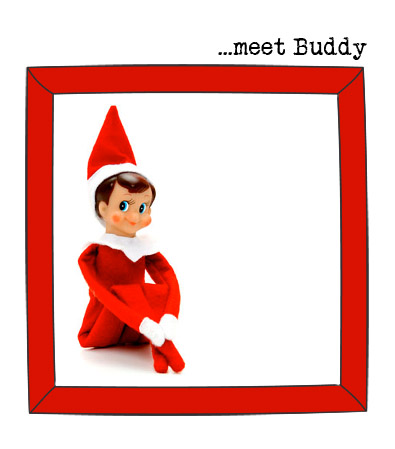 You’ve heard me talk about Buddy before and while I should probably be Blogging about turkey projects at this stage of the game (like perhaps the one Grace made in pre-school today that she proceeded to come home and EAT, glue and all), I have to share the magic that is Buddy before he makes his arrival next Friday! Emily gives me an official countdown every day. “15 more days until Buddy comes!” “12 more days until Buddy comes!” Screw Thanksgiving. We’re just interested in when our little felt houseguest arrives.

(side: I mean no offense to Thanksgiving, cranberries, stuffing or pie of any sort. I actually love Thanksgiving and all of the carbs that come with it. Good day).

So, you want to know exactly what we do with this little elf do you? A good place to start would be to claim your own elf. They come straight from the North Pole! Don’t believe me? Then how did ours get dropped at our doorstep back in 2007 in a box clearly stamped North Pole?

Inside the North Pole outer box is your cute little felt elf sitting in the box pictured above. What’s so special about him? Well, he’s Santa’s helper of course. The idea is that he comes straight from the North Pole to watch over you during the Christmas season. He leaves your house and reports back to Santa each night to tell him if you’ve been naughty or nice. He usually hides in a different spot upon returning so part of the fun is getting up in the morning to look for him. (Hint: He always hides in plain sight but high enough away from little grabby hands).

How come your elf won’t talk to you? Well, he can’t. He just listens. And you can feel free to talk to him or ask him to tell Santa stuff. He is ALWAYS watching & listening. But as per Santa’s orders, he will not have a conversation with you and most importantly, you cannot touch him or else he’ll lose his magic.

Just kidding. It’s not that dramatic.

So a little bit about our own Buddy (and yes, he was named after Will Ferrell. Similar antics with much less bushy hair):

– The movie Elf taught us that elves love sugar. Buddy gets into our sugar bowl every. single. night. and tracks tiny footprints through it. Yes, I wake every morning and have to wipe sugar off my countertops. My mother thinks I am insane. I {hope} one day my kids will look back and not see insanity but see a really fun Mom. But I embrace my insanity in other ways, make no mistake about that.

– Buddy comes bearing gifts. They are not always big gifts but he does leave the kids something each night. Probably once a week he leaves something a little bigger (in the past this has been new pajamas, three sets of new boots, a Christmas DVD, Hallmark ornaments, etc). Usually they are smaller items sprinkled in the sugar (gold coins, mini chocolate Santas, some M&Ms, etc). At the beginning of his visit last year, he left an Advent calendar which was well-received. This year one of his bigger gifts is going to be this set of wise men. He also tries to leave something extra-special on the 23rd, the night before his last. Two years ago it was 3 small, fat wooden nutcrackers that the kids went crazy over).

– Buddy is big on silly antics. One time he took out all of our canned goods and stacked them in a big pyramid in the middle of the kitchen floor. Another time he hung a candy garland from our curtain rod. And another he opened every cabinet door and drawer in the kitchen which was a bit dangerous walking into as soon as we woke up. This year I have it on good authority that he’s planning on having a snowball fight with the bag of cotton balls in the bathroom. It’s not uncommon to find him swinging from a light fixture or a bedroom fan each morning.

– Keeping in line with his love for all things sweet and sugary, he sometimes gets into my massive sprinkle collections and we’ll find bits of colored sprinkles mixed in with his sugar trail. Other times, we’ll find our bottle of syrup left out. Last year, he wrote a note asking if we could have frozen waffles on hand at all times.

– No I am not as nuts as I appear right now.

When does a Christmas elf usually arrive? Any time really. For us, Buddy arrives the day after Thanksgiving once our tree goes up. It’s always night and he always enters in some grand way. The first year he was left in that North Pole box I mentioned earlier. The second year we found him on our front stoop in a miniature sleigh. Last year, he almost broke my glass front door. The kids and I heard a loud rattle and when we opened the door, we found Buddy in the Cadillac of sleighs, sitting on the stoop with gifts on board and a trail of snow behind him. Emily already wrote him a letter and said that she couldn’t wait to see how he arrived this year. I’m thinking one of these times the kids are just going to expect to see him park a car right in front of the house.

Other: Buddy always sends a letter around October to get the kids excited about his impending arrival.  ::  The absolute ONLY time that anyone is allowed to touch Buddy is on Christmas Eve. I let the kids sit on the couch and I carefully pick Buddy up from out of our tree (What? He chooses to sit there every year on the 24th so he can survey the dinner scene on Christmas Eve) and place him in their hands. You have to see how excited they are to hold him. I always take a picture of this special moment.  ::  Emily cries every year when Buddy leaves.

Buddy’s magic: I sit here right now and swear to you that the magic of Christmas and elves and sugarplums and all of that jazz is absolutely real because of this story. One day (hopefully not this year but I am aware that my kids are only getting older and other kids at school can be harsh and cruel) when they figure out the whole elf thing I won’t deny that I was behind the magic the whole time, but I am certain I can make them feel good about Buddy and Santa and everything else because at 30, I still believe. You can laugh if you want but I know there’s a real Santa because otherwise I am not sure how my living room gets packed with toys the night before Christmas. Anyway, one day last year I had to ask Buddy to leave. The kids were being so disobedient that I had to break all elfin law, TOUCH Buddy (I know, the horror!), place him on my kitchen counter and ask him to just get out because what he was witnessing was just too terrible to report to Santa. When everyone was in their bedroom, I hid Buddy away in a kitchen cabinet.

Fast-forward about two hours. The kids were begging Buddy to come back. Again when nobody was paying any attention to what Mom was doing, I stuck Buddy in the side of our Christmas tree. A little more time passed. We heard an ornament fall to the ground, looked over and wouldn’t you know it? There was Buddy. The ornament fell from the exact spot he was sitting in only nobody was near him at the time.  Call it what you want but the three Miller children and their gullible kid-at-heart Mom believed it to be a real Christmas miracle. Buddy was back AND he was trying to break our Christmas ornaments!

Now it’s time for you to order your own elf and share in the wacky holiday fun. If you don’t want to order from the website (although I do recall them having very speedy shipping), you can usually find your own Buddy at various nurseries and Christmas stores.