I had a hundred thoughts running through my head yesterday as I mentally composed this entry, but I just wasn’t sure I would adequately get them all down. Lets see how I do.

Recently, I’ve been setting a horrible example for my children.  I’ve been allowing them to think that its ok to let other people, mostly strangers over the inter-webs no less, shame you into feeling bad for doing something that you enjoy. Unplanned, I vocalized my feelings to my mother this weekend and as I heard myself say them out loud, I thought “This is totally unacceptable”. Here’s what happened. There are two portions to my story.

Its no secret that we love the holidays in the Miller house. Love, love, love them! We do lots of fun projects, we enjoy family time, we house Christmas elves and we love to put our tree up earlier than most. I used to put it up the day after Thanksgiving but last year, my kids talked me into putting it up about ten days earlier because they wanted our elves to visit. The rule in our house is, elves don’t visit unless the tree is up. I never saw how this would backfire on me when we welcomed our first Christmas elf named Buddy back in 2007 but alas, I did not think this entire plan through.

So last year, I happily put my tree up around November 16th and let me tell you, people we a little too concerned about the greenery I parked in my living room.

And my FAVORITE of the bunch (no really, this is a good one).

“Can’t we just PLEASE get through Thanksgiving first?!”

Is this rhetorical? I don’t know, can we? Am I supposed to give  a serious answer here? Help.

What kind of statement is this?! I am not sure where I shared a picture of my tree and then posted right near it: “Screw the turkeys! The Millers are moving right to Christmas!”

We love Thanksgiving. We love the food, the family, the whole giving thanks thing. The food. You know, the stuff Thanksgiving is made of. Oooh, stuffing! I don’t understand why my having a decorated tree alongside a Thanksgiving dinner diminishes our celebration and makes us look awful for ignoring the turkeys. WE’RE NOT!

Sorry for the caps but I am being clear, right? I think maybe there was some confusion last year so I just want to stress:

THE MILLERS ARE NOT IGNORING THANKSGIVING!

Ok so now fast-forward to 2013. Picture one unseasonably warm weekend, circa the 16th/17th, and my kids are begging to drag the tree and the trimmings from the attic. I wasn’t feeling it. It was too warm, I still had clients coming over for Christmas photos and I have hundreds of special ornaments on my tree. Just more for them to eyeball and for little fingers to grab. It’s a big project. But then, the same reason that had me drag it out early last year got me again: my kids, ages 5, 9 and 10, love Christmas magic. They just truly are so happy this time of year. They love Santa & they love Christmas elves. This entire season is pure magic to them. If us putting up a tree two weeks earlier than everyone else brings them *that much more* joy, why should I say no? It costs nothing. It hurts no one. What’s the harm?

They were in the basement plotting how they would come upstairs and ask me one last time. They are my brothers and I reincarnated. We did the same thing. There was a time in the early 90s we wrote very detailed, pleading letters to my parents because we wanted hamsters. “Free the hamsters!” it said. It was a campaign to free them from pet store cages and bring them home. You know, to new cages. :P But the plan worked. So yeah, I’ve done all of this before kids. I used to orchestrate all of this. I was damn good at it too, being the head honcho and giving my two younger brothers all of the dirty work.

I heard their chatter and I knew what they were up to. “So we go upstairs and just put on the Elf on the Shelf movie. Then we start singing Christmas songs. And then we will color her a picture of a Christmas tree. And if she yells after we ask about getting the tree down, we just run really fast back downstairs!”

And then I heard my oldest daughter say “She doesn’t want to put it up because people on Facebook will say something.”

It was right about here when I thought to myself “I am an ass if I am seriously sending this message to my kids” and “When they come up here, I am totally saying yes!”

Long story longer, we started to clear the corner where our tree goes just as my husband walked in from a 24 hour shift at the firehouse and realized what he just stepped in to. Perfect timing my friend. :) He dragged the tree out of the attic for us and up that puppy went. And even though I never mentioned it again to the kids, I still have yet to publicly state that we have our tree up or share a picture of it online. I figured I’d just casually post a shot Thanksgiving weekend. No one had to know exactly when we set it up right?

Now here’s the second portion of my story. It involves the elves. Specifically Elf on the Shelf. We are big fans. Huge. Click here if you don’t believe me. This is a totally unrelated topic but seriously, enough with the “OMG they are sooooo creepy!” comments. What the heck?! If they creep you out, here’s an idea: Don’t adopt one! See how simple that was?

So we added Buddy to our little family in 2007. And then in 2012, the kids asked Buddy to bring a girl with him, so Ginny started hanging around. Lots of fun.

Saturday night, the kids and I were in Hallmark and we saw some boxed elves. We peeked in. They changed their face shape this year! They are much rounder. Very cute (unless you’re in that creepy camp. Then maybe go get yourself a Christmas reindeer and call it good). I knew what was coming next: “Can we please get another elf Mom?? Please?? There are 3 of us and there can be 3 elves! Pleassssse?”

We left the mall, elf-less, but I admit, I did entertain the thought quietly for a split second.

Sunday afternoon, my Mom was over and the kids were telling her all about the new elves. I found myself defending the idea of adding a 3rd elf to our stash. I said something along the lines of “I would add another one but I can already hear people’s comments. Stuff like “THREE elves???” and “Wasn’t one elf enough?”“ And as I was saying these ridiculous things, I thought “I am doing it again. I am not giving my kids something that I personally feel could be fun because I am actually showing them that I am allowing other people’s mean-spirited opinions to control my actions.” This is unacceptable! And weird. If you know me, you know I really don’t give much stock to what people think or say about me. So why was this stuff bugging me? It’s some weird, unwelcome phenomena taking over Facebook lately I feel like. People are just becoming bolder and offering opinions on everything. Everything! Whether you asked or not, they’re making fun of something you posted that you were thankful for, or they are going to publicly state they really don’t care what you ate for dinner or express bewilderment at how many times your children were BOOed on Halloween or even state that the angle of the newborn you just posted look like he’s going to fall right off the screen (I am actually laughing right now because this recently happened to me! Um, you do realize part of the editing process is me composing my shot at a certain angle right? So thanks for the opinion but really, not.) I get what everyone is doing. I fancy myself as being quite sarcastic so you can’t try to pass your sarcasm off as something it’s not when you are directing your comments toward me. What’s that saying… something along the lines of how in every sarcastic joke there’s always an ounce of truth?

Last night after dinner, I told the kids to get in the car. If Target had the cute fat-faced elf, we were going to grab him. I always thought three might be kind of nice since the kids can each take one with them when they leave the nest. And their faces were *so* happy (especially Grace!) when they walked around the store carrying the elf box. So happy. And I nearly denied them that extra dose of Christmas magic because of the comments I could already hear in my head. I’m thinking it might be time to create a really tight friend list on FB or just get off the thing altogether.

So now that I have typed all of my feelings out, this entry will come in handy. I can link people to this entry every other day from now until the new year. =P I find it sad that I have been planning to post a shot of my tree with a disclaimer in the caption. Really, a disclaimer. ….?!?!?….  Something real serious too like “Discuss how my tree is up too early and… dun dun dunnnn…. you shall be unfriended.” Oooh, chilling, right? ;) Now I don’t have to do that. I will just post all of my holiday pictures and if I think they’re going to cause any type of controversy because you know, Christmas trees and little tiny felt elves can do that – who the heck knows WHAT my Christmas cookie pictures are capable of?? –  I will just link to this entry so everyone can just wise up and keep their sarcastic comments all bottled inside.

I saw a caption on a friend’s IG post yesterday under her tree: “We like a little fa la la with our gobble gobble.”  That’s what I’m sayin’!

Thanksgiving turkeys and Christmas elves… why can’t we just all get along? 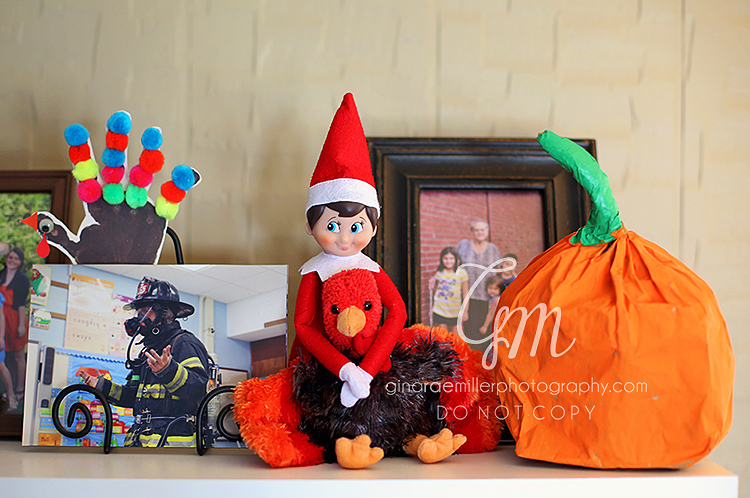 Meet Sheldon. The newest elf to join the Miller house.

(I’ll be sharing more of our elf hijinks in a separate entry. And you know, I’ll eventually get around to sharing a picture of our scandalous tree).

* Lest you think I have way too much stock invested in what people in Facebook are or are not commenting on, let me please assure you that over half of this entry was composed tongue-in-cheek. I don’t really hate anyone. I’m not hair-flipping off of Facebook. I don’t sit at night crying over comments people leave on my personal photos or pull my hair out one piece at a time over the stress of it all. Lighten up! I just posted this to get a little something off my chest and maybe have everyone think before they post, and act a little friendlier and more warmly toward one another this holiday season.