I love when photographers share before and after shots. Before shots are commonely labeled as SOOC (Straight Out Of Camera) and afters are post-processing, meaning we played around in our editing programs bringing out your photo’s maximum potential. I do all of my processing in Photoshop. I was working on a few edits last night of a beautiful little 4 month old. I usually don’t photograph babies between 2 weeks and “happy sitters” (about 6 months) but it was really important to Mom that we got some photos now before the 6 month mark since she missed having a newborn session. It’s not that I don’t adore little 4 months olds, because I love babies. But man, they are hard to photograph! They are too little to sit but too big for most of my props, so you are kind of left scratching your head as far as what to do with them. (psst: A Bumbo comes in mighty handy for close-ups!)

This entry isn’t really about 4 month old sessions though. This is about before and afters! I had Mom prop baby up with one arm for a few shots during this shoot. No worries I assured her. I would just Photoshop her arm right out after. Like this: 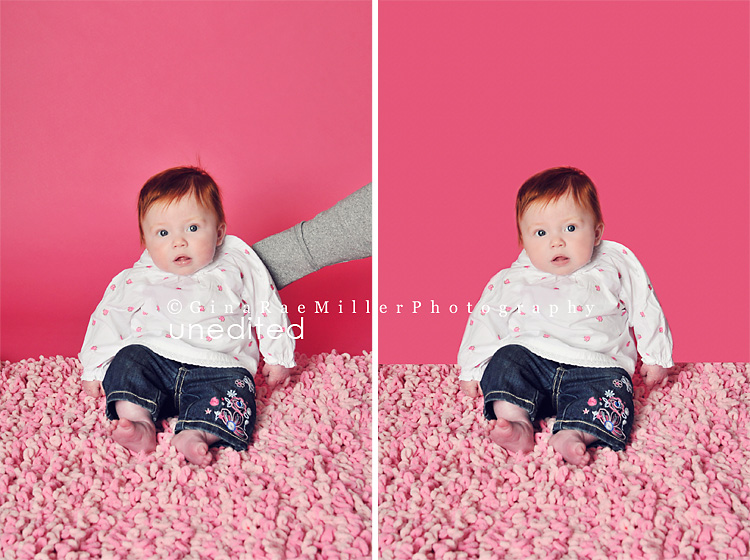 That’s a fairly easy edit as far as removing the arm goes. Since baby was on a solid color, I just needed to paint on a new background, carefully masking around my subject and then I added a bit of noise to my pink layer after. Why noise you ask? (And no, you won’t even be able to detect it with your naked eye right now. Not unless you zoomed in a few hundred percent). Noise helps during printing so we don’t get gradient lines, or banding.

We also had an arm in this shot here, and something like this is more tricky since now we are working on a patterned wallpaper. Since my subject was sitting pretty centered right under that big cream diamond, I used my polygonal lasso tool (I realize I may be speaking French to the non-Photoshop users. Just sit back, relax and enjoy the images), created a layer over Mom’s arm and the rest of that side of the frame, used the lasso tool to carefully select background from the good, armless left side of the frame, copied it, flipped it over as a mirror image and pasted it over the layer on the arm side. Then I had to do a bunch of cloning and patching. And I cleaned up the white floor molding. I have no idea if that just made sense to anyone but me but alas, that’s what I did.

4 month olds are also very drool-y. If you look under the “G” in my watermark, you’ll notice I had to clone out a bunch of drool and spit marks. ;) 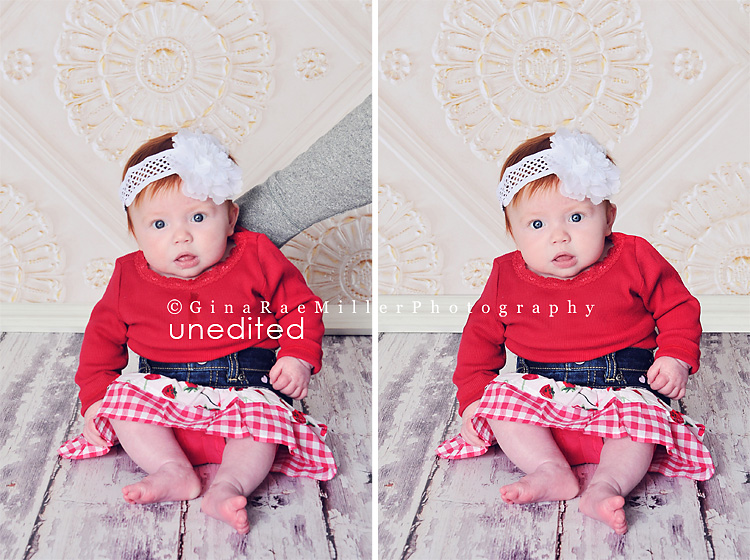 Here’s a cake smash sample. Here’s a bit of insider info: I don’t work in a very large space. However, you would never know it from my finished photos. :) Many times I need to fill in solid paper on my smash photos if I am doing a pull-back shot and trying to get my subject really centered and not cropped with lots of clean, open background surrounding him. I like that look. Here’s what a before would look like along with an after. Don’t forget to add the noise to the solid layer so you don’t get banding! 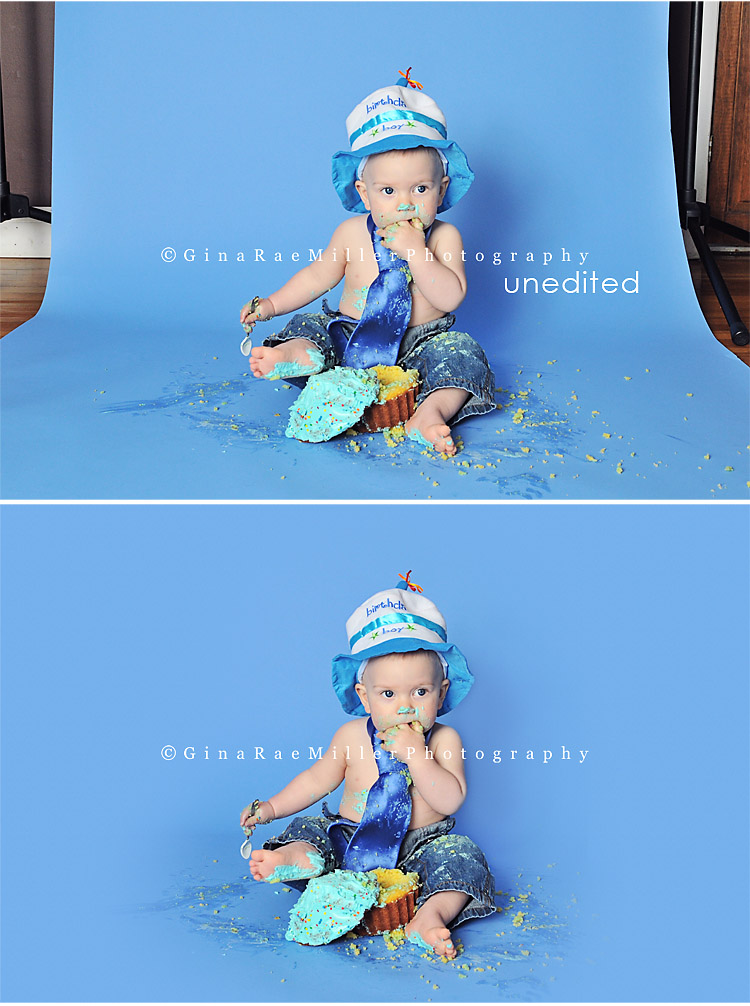 Of course there’s always editing that comes with a newborn’s skin. This little beauty actually had really great skin. Many newborns have teeny red spots or very dry, flaky skin. Here I only needed to remove the scratch on her right cheek. I also lightened her under eye creases and a few slight facial shadows. 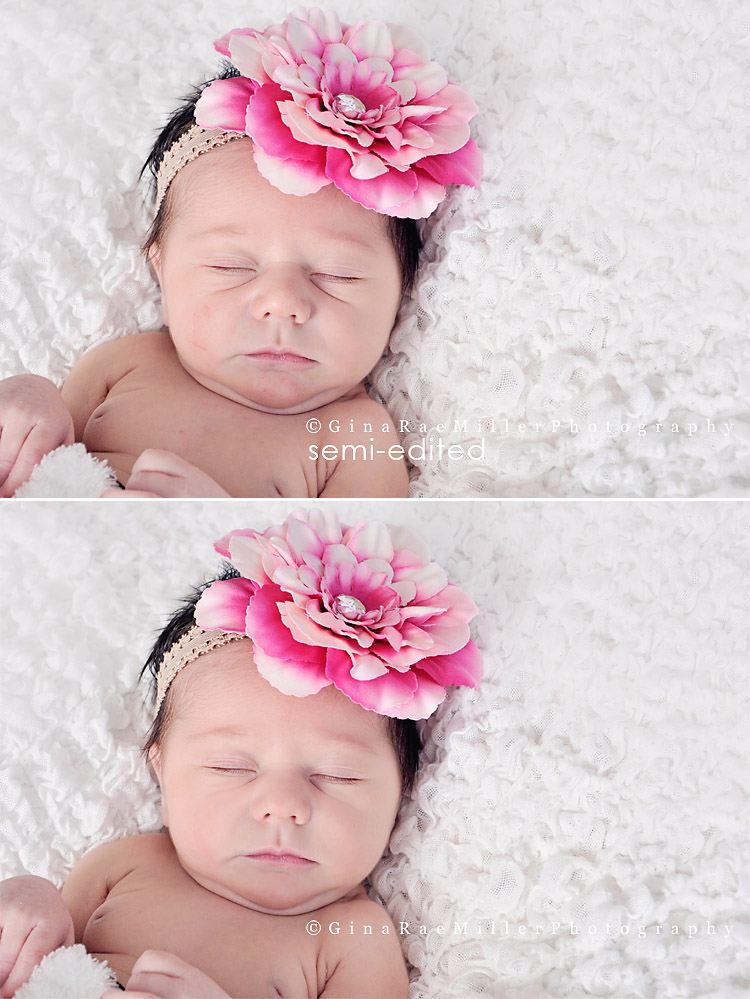 Here’s one last newborn sample using my little model from above.

This was one of those shots where I was repositioning myself on the floor near my newborn pillow, getting ready for a few sleepy shots and baby lifted her head out of the blue. Snap snap snap. Lets see if I caught anything…. And I did. I thought her little lips looked so cute here. But I needed to 1) fade my blanket and 2) edit the red splotch under her lower lip. I also opted for a warmer, more vintage skintone post-processing since I didn’t want to have a stark white blanket and a very pink baby on it. I already edited her in a birdie hat very clean and crisp so this called for something different. I also loved the classic simplicity of the black and white shot so I included that too. :)

And those, my friends, are just a small handful of tricks and as of today, non-secrets, regarding what goes into editing your photos after our session ends. I love meeting with you but I also love playing in Photoshop. :)

If these sort of posts interest you, make sure to leave a comment and tell me so! I always have tons of before and afters but I rarely think to share them side-by-side. These were just a few I had from sessions I shot in the past week or two. I would be happy to share more in the future though.

Next post, Project Life, Week 3! Have an awesome day!