I thought I would keep my running diary going here. It’s a good place for me to refer to my times and paces post-race plus maybe it will inspire others because I can assure you, I was not always a runner.

Yesterday my husband and I ran another 5K together. This was the Gary Farley Nassau County Police Memorial run. You can read a little bit about Gary Farley here. 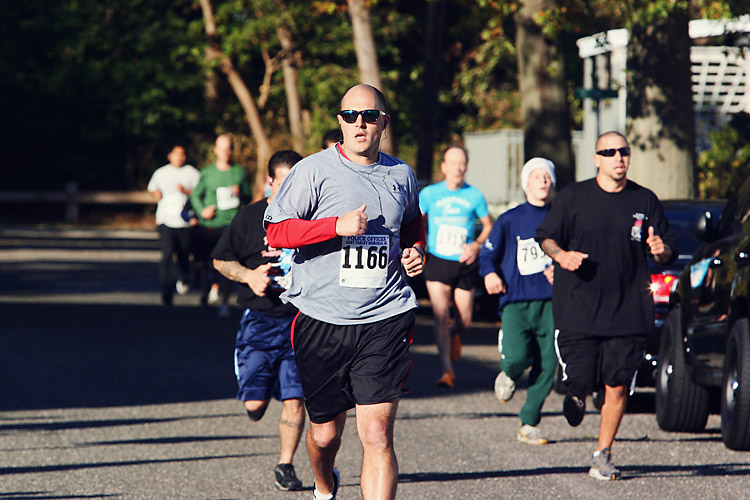 Of course I don’t bring my camera with me on race day so these entries will usually always be filled with iPhone shots ~ and the occasional shot taken post-race at home. One of my favorite, easiest shots to take is of our running bibs. :) 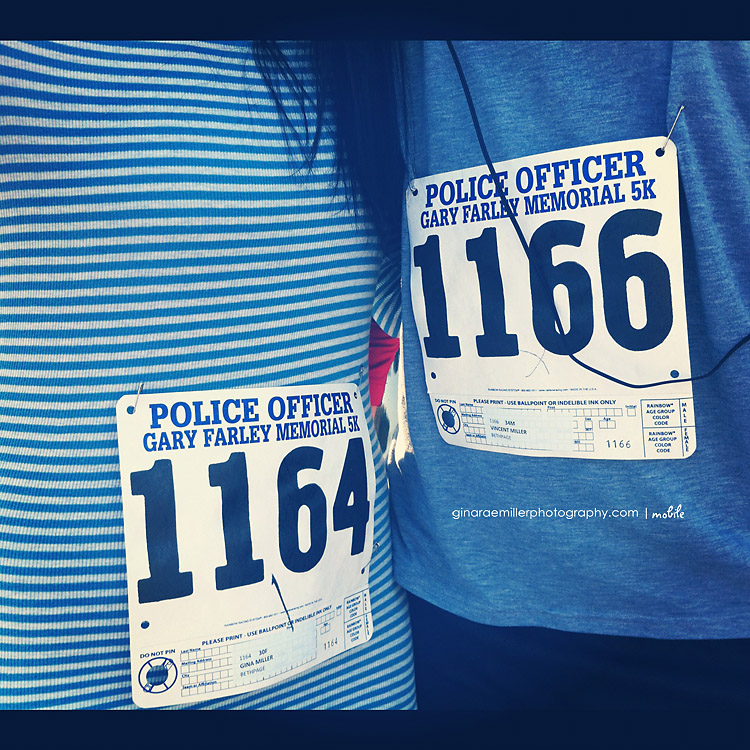 The black marker slashes on our bibs were added after we received our shirts. This time we got long-sleeved navy blue NCPD running shirts. I’m telling you, I really feel that you get spoiled when you sign up for a 5K. Most of the entry fees are between $20-$25 and not only are you usually donating to a worthy cause but you get a nice shirt (some tee, some running-quality shirts and we are even getting sweatshirts for a 5K we’re doing in December!), sometimes a swag bag filled with treats, water bottles, medals, trophies, etc. It’s really nice.

Yesterday we ran with a lot of law enforcement. The race started under the American flag. It was huge and suspended between two fire trucks. What a great way to start a race! 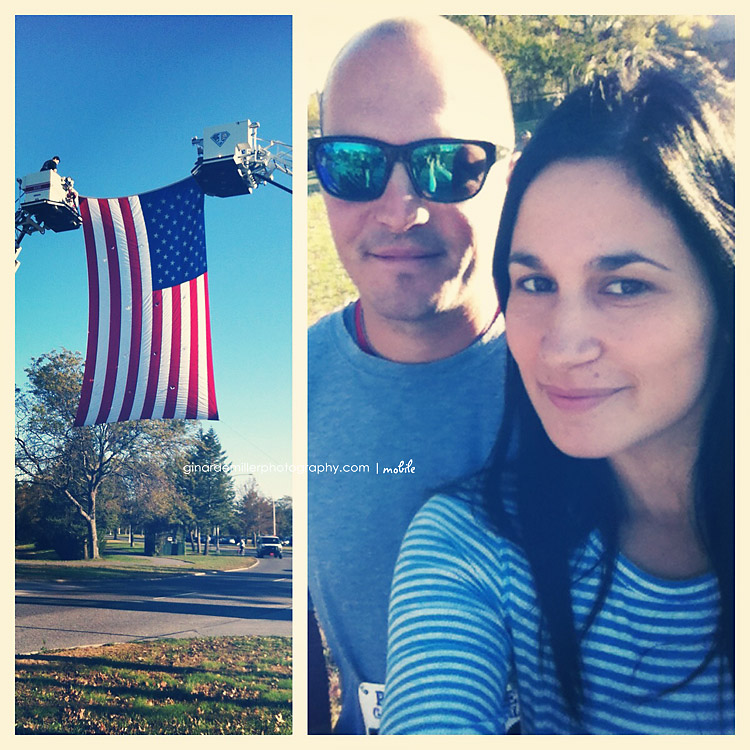 We were cold and as my eyes will attest to in the picture below, I was sort of tired. I only managed to squeeze in three bites of banana and a few sips of water pre-race. I like to eat and hydrate at least an hour before but I may or may not have taken advantage of my snooze button yesterday morning. I cannot confirm or deny this. 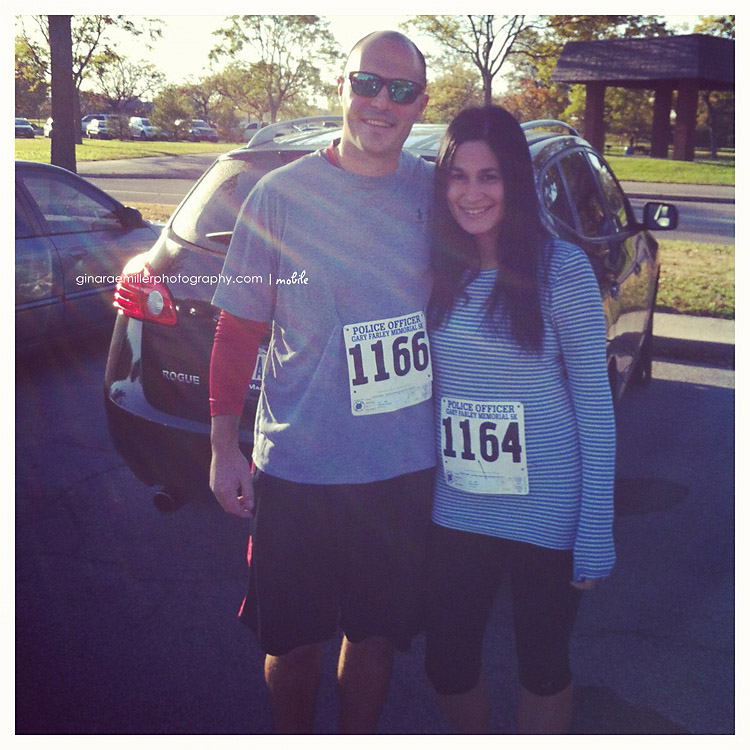 One of my brothers-in-law took the above shot. We were missing my sister-in-law who had to work. She’s the one who got me itching to run so it would have been nice if she was there. Next time. :)

It was COLD out. Brrrr! Cold or not, it was a great course! Sunny and fairly flat. Two very small hills. I am used to running in crazy winds now, which is just like climbing a hill if the wind is blowing directly against you, so I just pushed through that. I finished my first mile in 8 minutes. I told my husband that I have a love-hate relationship with racing. I’ve always had a very competitive gene. It’s kind of annoying. LOL! Whether I want to or not, my adrenaline totally kicks-in and I just run faster during these races. He says that’s a good thing. How else do I expect to improve my time? I guess he’s right. And the nice part is that I am always competing with myself. I knew out of him and my brothers-in-law, I was coming in 4th. I don’t even try to beat him (although I do like to joke that one day I will. Hey. I don’t rule anything out!) Nothing wrong with giving myself some healthy competition I suppose!

We were about a mile into the course, I rounded one corner and …three smiling faces were waving little American flags at me! My parents brought my kids to watch us run! It was adorable. I was so exited to see them and they looked equally as excited to see me. My Mom, bless her heart, brought my camera and was taking some shots. I smiled and waved. The second time I saw them, I said “It’s not gonna work!” My camera is all manual. If it’s not set for a certain shot, chances are it’s not coming out. Well, I checked my settings after and wouldn’t you know it, the shots probably wouldn’t have been so bad. ISO 320, f/6… they may have even been in focus. However, THERE WAS NO CAMERA CARD IN MY NIKON! LOL! I had it in my MAC after a session from last week. Oh well. A for effort.

I thought it was pretty cool that they announced our names as we crossed the finish line.

Here’s the extra-fun part: Apparently, we won trophies and had no idea! Last I checked, I was 4th in my age group. Truthfully even if it would have said 3rd, I wouldn’t have thought anything. I usually forget that they sometimes do awards for the top 3 finishers in each age group. We had to leave to go to my son’s homecoming parade but my niece texted me a picture of the trophies later in the evening, which I raced over to pick up. LOL! I said “Are you sure this is mine??” She said YES that they even announced my name! I think I would have fallen over if I heard it. A little bittersweet that I missed my first racing award. Guess I’ll just have to plan to earn another soon. ;) 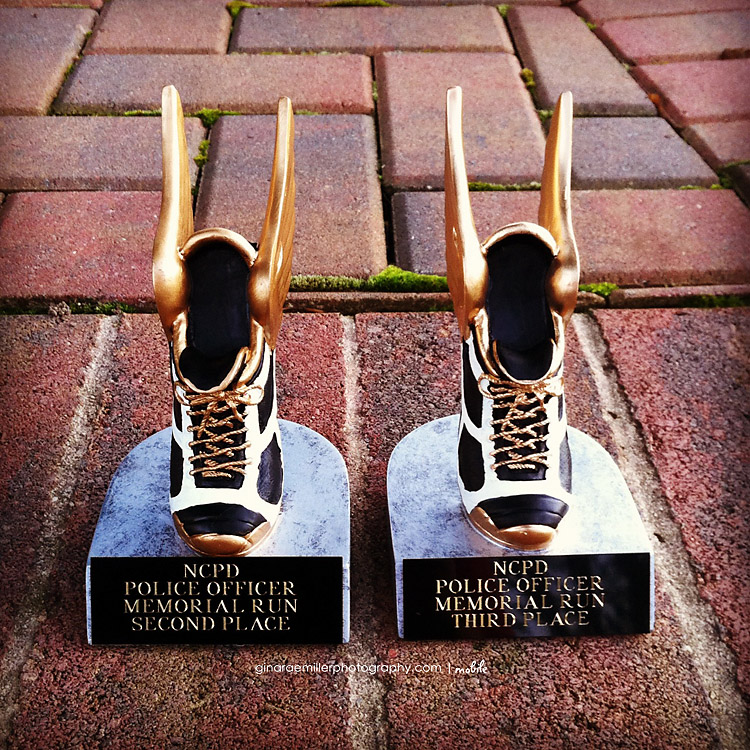 Here’s the part that I am hoping might inspire others: I placed 183rd in the race itself. I did NOT place 3rd. They give awards for various age groups. I thought it was also interesting that even though I ran my fastest mile to date, I placed lower down the list than my other 5Ks. (At least check, there were 379 runners on the final tally sheet. There was an overflow of very fast men at the top of that tally sheet). That just means that there were that many more people who ran 7 and 8 minute miles (this race was packed with law enforcement and good to know, fit law enforcement!). So you just never know! I don’t run 50 miles a week. I don’t eat, sleep and breathe running or any type of working out for that matter. I log about 12 miles a week. I run when I can, as my schedule permits. That usually equals about 3x a week. I don’t train on a schedule. I let the day, my chunk of open time and my body dictate how a day’s run is going to go. I have a family and a job that needs to come first. So this is totally something you can do as time permits. If you are thinking about starting your running journey, I wish you the very best! It just makes you feel great! I pinned a quote on Pinterest once and it’s really true: “Whether it’s one mile or ten miles, you will never regret lacing up those running shoes”.

On October 2nd, I ran in the Diva 5K with my sister-in-law. What an awesome race! I am hoping that this will be one of my half marathons in 2012. Again, you got so much for your $25 entrant’s fee. We got really nice light pink racing shirts (moisture-wicking and all that), a swag bag filled with samples (lots of yummy Luna bars, one of my favorite snacks! Try the White Chocolate Macadamia. Amazing!) and a lot during and post-race itself. I would have been happy with the pink boa and tiara they handed us mid-course. I was not expecting an awesome medal at the finish line! We got really nice medals and long-stemmed roses handed out by shirtless firemen post-race.  A nice touch, but a little lost on this chick who is married to one. ;) 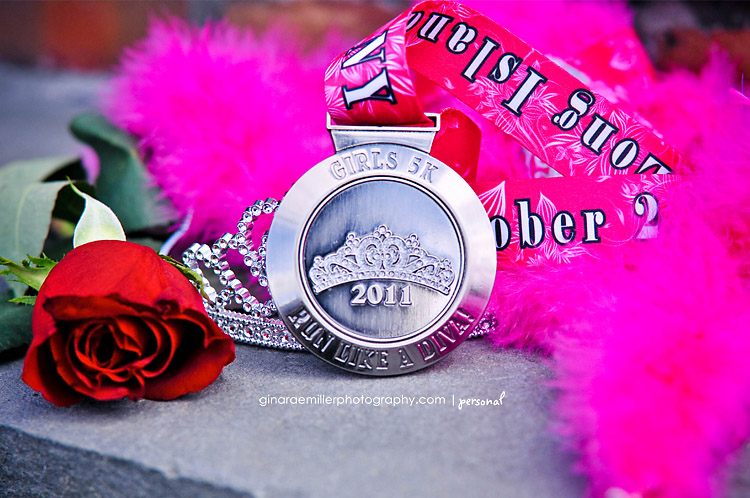 I probably did between 5 & 6 miles on the day of this race. Unfortunately, we timed our bathroom break a little too quick to the race’s start, and we literally sprinted for a good mile to get to the starting line. Not ideal to be wasting all of my “good first mile energy” as I put it. But we started, I got my Nike+ GPS app going, water bottle was situated and I just kept at it. The race starts so deep into Eisenhower Park that I probably walked another 2 miles post-race just to get out and back to my car.

Of course, bib shot! Upon the suggestion of one of my running friends, I started logging my race results on the back of each one. 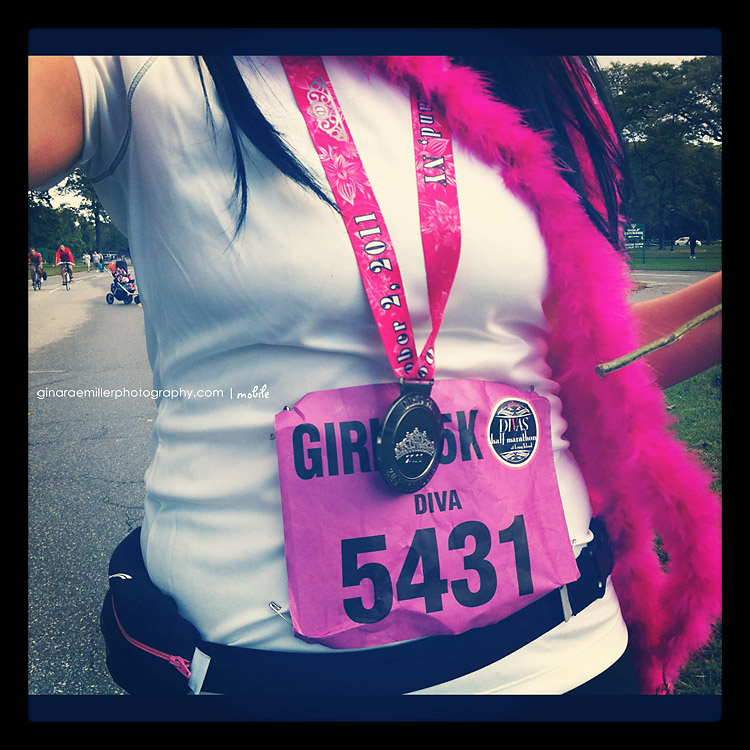 I have since switched up my running sneakers. I hurt my ankle a little bit after the Diva race. Thankfully, a week of small runs, an ace bandage and lots of ice took care of that. I now run in purple and gray Nike Zooms which are stabilizers for my ankles. If you are in the market for new shoes, do yourself and your feet a favor and go to a specialty running shop. They will know exactly how to help you.

Hm. Another fun entry might be on my running gear, tips and tricks. Look for that soon!

So what’s next for this runner?

November: A possible Turkey trot if our schedule permits.

December: A Ho Ho Ho Holiday run right here in our town with guest star Santa Claus! We plan on bringing the kids down for the fun run first and we’ll also be donating some toys to the John Thiessen Childrens Foundation. (Side-note: John Thiessen, a childhood brain tumor patient 23 years ago, ran in yesterday’s race with us. We saw him in the parking lot jumping rope prior to the starting gun. He came in 7th overall with a 5:57 mile. Rock. On!)

January: Sayville Running Club’s Run To The Brewery. This is a 10 miler and I am giving myself a little more time before I decide if I am doing it or not. My husband definitely plans on doing it. I am unsure I’ll be able to train properly in a cold NY Winter. There’s a good chance snow will even be on the ground for this run! We’ll see. It would be a fun one to do, even if the beer stein award does nothing to excite me.

I hope everyone had an awesome weekend! We did with our running, our son’s homecoming, a football game and my first holiday shoot to kick-off the season! Looking forward to some coffee, cookies and relaxing with my shows tonight. :)