Thanksgiving was like a real-life Friends episode this year. No, not with two kind of mashed potatoes (or was it 3?) or a trifle with a layer of beef sauteed with peas. And nobody even celebrated from inside a box. (Hopefully you’re enjoying these Friends’ references and don’t think I’m totally off my rocker). But it almost included no turkey. If I were to title this one, it would simply be: The One Without The Turkey.

Long story short, we waited way too long to start heating the oil to deep-fry a turkey so at 6pm, we still hadn’t even put the bird into the oil yet! My sister-in-law hosted and she was upset because she “ruined Thanksgiving” (her words, not mine. I assured her that I didn’t even like turkey all that much). She’s nine full months pregnant. Perhaps that disclaimer is necessary. It actually all worked out because Vin worked Thanksgiving day and normally would have missed dinner. The way it ended up, he made it just in time.

The only shot I wanted to get was one of my three kids dressed up. Done. I didn’t care if I was in any and we didn’t try for a family one since it was already dark by time Vin got there. I ended up taking a lot of pictures in the garage because that’s there we spent a lot of time. My sister-in-law felt bad but I kept telling her we were having fun. It was drizzling out, lots of us were huddled into my parent’s two-car garage and the wine flowed aplenty. I had to get a shot of the big pot of oil for posterity’s sake (you can see my Dad’s hand over it making sure it was actually warming up) and of course, the bird when it was carried into the kitchen for carving. We all cheered. All in all, it was a fun, memorable holiday as ours usually are. 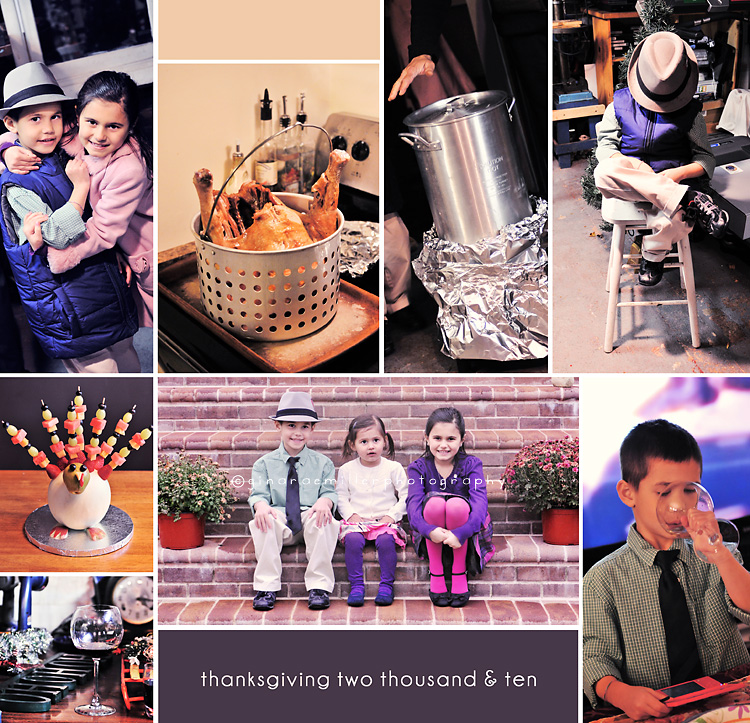 How cute is our fruit turkey? Definitely an idea to file away for the future! (It was originally seen in Family Fun).  We used a honeydew for the base (make sure to slice a small bit off to keep it flat and steady) and a small pear for the head. Everything was attached in with wooden skewers (some had to be cut-down in size). The eyes were blueberries, the beak was a cantelope triangle and the gobble was strawberry (attached to the beak with a toothpick). The feet were carved from two apple slices. And then the feathers you can really do anything with. I’ve seen a grape and cheese variety which sounds yummy. We wanted to keep ours dessert-friendly so we layered on blueberries, grapes, watermelon, cantaloupe and strawberries.

Hope everyone had a great long weekend!